Of Themes and Quests

Darkness Fled leads readers through a rich layering of themes which are currently visible not only in the missionary biography category, but in the general Christian market as well. These themes include:

The following 7 texts are discussed within thematic categories, highlighting the quest aspects a reader may experience.

In her journalistic presentation of war, chaos, displacement and suffering, Mindy Belz weaves up-close accounts of assault and violence with contemporary political analysis. Although Belz is inspired by “the courage of the Middle Eastern Christians,” her writing gives voice to “the fear of the crimes [ISIS] could commit against the women and children [as being] much greater than the fear of being killed.” While Belz’s courage is commendable, On the Run lacks a strong central character to offset the prevailing tone of reasons-to-fear. Without this lead, there is no one to follow, no journey to take. 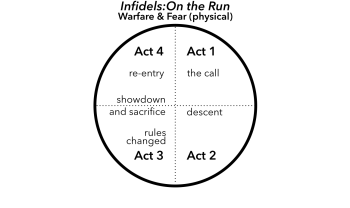 In contrast, Darkness Fled‘s central character combats fear head-on. As a husband and a father, Dave declares his trust in God and commits his family’s physical and spiritual security to Jesus. Yet fear does not give up easily. Dave and the mission team must fight the fear of arrest and interrogation by Islamic secret police as well as the fear that comes with the haunting darkness of spiritual home invasions. Throughout, Darkness Fled does not cause readers to embrace fear, but to face fear as a foe that must be overcome.

Spiritual Warfare and Darkness Fled are complimentary works. Ph.D. Larry Richards provides comprehensive teaching, instruction, and guidelines for dealing with demons, while Delgado’s untrained missionary instinctively lives out Richard’s biblical principals. Delgado’s tale repeatedly affirms Richard’s claim that “ordinary” followers of Jesus participate in spiritual battle under no inherent ability of their own, but under the authority of Christ.

Both authors emphasize reliance upon being lead by the Holy Spirit. Neither author condones a paranoid hunting-for-demons approach, and neither text is belabored with unapproachable language. Richards, through well-known scripture passages, invites westerners to stop living “as though the material world is the only real world.” And Delgado, through personal testimony and song-like creed, invites readers to engage the spirit realm:

The Cost and Seeking Allah both present the reality that for Muslims power confirms truth, truth demands a choice, and quite often, truth must be introduced through friendship.

In The Cost, Ali is eye-witness to the murders of infidels. He understands the risk in turning to Jesus—like his favorite aunt, he’ll lose his family—but Jesus has appeared to Ali and this encounter is enough for him to make a stand that nearly costs him his life.

In Seeking Allah, Nabeel intellectually debates the trustworthiness of the Bible and the validity of the Quran with his close Christian friend. When Nabeel admits that the only way he can cling to Islam is by “denying [his] ability to arrive at objective truth,” his friend suggests he ask God to confirm the truth and God answers Nabeel with visions and dreams. 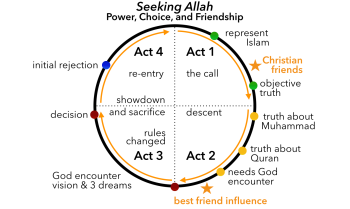 In Darkness Fled, Dave’s interactions with his students and his female aid become what Seeking Allah and The Cost prove to be critical for dialogue between Christians and Muslims: a strong relationship. In Darkness, the reader gets to become the Muslims’ friend.

Like The Cost, Darkness relates physical and emotional consequences for choosing Christ. And like Seeking Allah, Delgado lets readers intercede for Muslims to have power encounters with God.

Trust, the Love of Christ, and Intercessory Prayer

Audra Shelby’s Behind the Veils of Yemen grants Westerners an intimate view of life as a female missionary reaching Muslim women. Shelby relates her personal struggles as a second generation missionary mother who is well aware of the risks and trying to do what’s best for her family, and as a follower of Christ who loves and intercedes for the Muslim women she befriends. The Veils is rich in detail, culture, and passion, and presents a call both “to Go” and “to pray for” Muslim people. Readers are encouraged to trust God and answer these calls as throughout The Veils Shelby presents her main lesson learned is “Trust God.”

Like other missionary biographies, Shelby writes in the past tense and uses summative statements, such as “Then I understood.” These aspects break the reader away from living the experience and therefore Shelby’s “Trust God” lesson comes across more as a testimony than as a shared reality. Although the momentum may be intentionally set so as to thrust workers into the field, The Veils ends up presenting an incomplete journey that can be understood as never having left Act 1.

In contrast, Delgado keeps readers in the present, does not sermonize his lessons but lets readers wrestle for answers, and ends having led readers on a journey of trust that comes full circle. Readers hear the tense dialogue between characters and God as they must trust Him to leave their culture when He says “Go,” seek Him to affirm their call when trials arise, wait on Him to speak during dangerous times, trust what He has whispered when everything else shouts the contrary, and place themselves in His hands when He asks them to return. Darkness Fled, though raw at times, establishes that God can be trusted throughout the entire journey.

In Kidnapped by the Taliban, the love of Christ humanizes would-be-enemies. Once missionary doctor Dilip Joseph composes himself to live his faith, he finds that underneath his captors’ exterior they possess common life values: family, fatherhood, and a desire for purpose in life. He is most touched by their humanity when two young soldiers dry his tears—an act that stands in stark contrast to the violent lives they lead. While Joseph does not explore in detail the multiple factors—seen and unseen—that contribute to the acts of the Taliban, he does present the miraculous intervention of God and the power of intercessory prayer. 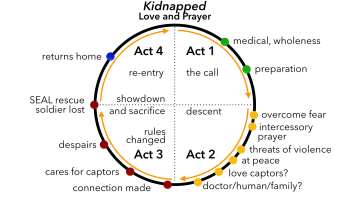 Darkness Fled allows the love of Christ to dethrone the fear of people who bear the title Muslim. In Delgado’s tale children are children, women are women, fathers are fathers, and sons are sons. There is shared laughter, caring, sorrow and joy. And the true enemy is revealed as the enemy of the Light.

Intercessory prayer is greatly encouraged throughout Darkness Fled. God’s answers are on display for the prayers and petitions made for safety, healing, unity, acceptance of Christ as Lord and Savior, open doors for gospel declaration, and liberty from maximum security imprisonment. (And also for a doctor that had been kidnapped by the Taliban.) 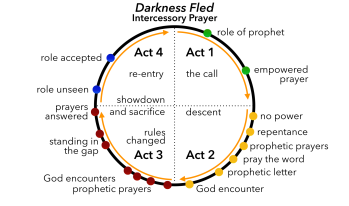 Brother Yun’s stories of imprisonment, brutal physical persecution, secret church meetings and midnight flights from authorities all ring true in The Heavenly Man. Yun’s testimony demands readers accept that God still speaks through visions and dreams, still miraculously heals bodies and liberates captives, and still moves upon and empowers believers through His Holy Spirit. Clearly, Jesus Christ is building His church in China and nothing can stop Him.

In both The Heavenly Man and Darkness Fled, the central characters portray an impassioned concern for the spreading of the gospel. Yun relates decades worth of perspective and growth over geographical areas, and Delgado focuses on planting the church in an unreached people group in a capital city. Yun, while cautious at moments, is bold as a lion in declaring the gospel. Delgado, on the other hand, learns to let the love of Christ shine through his friendships. In bearing their burden, both men come to trust Jesus as Lord of the Harvest.

While Yun’s experiences may feel distant to the Western mindset (we are not yet facing imprisonment for the gospel), Darkness Fled invites readers to experience many of the same claims, but as a Westerner in Muslim territory. Visions and dreams, prayers for healing and imprisoned Christians, and Holy Spirit empowerment are all par for the course—even for untrained Westerners. And central in all this is a call Christians can answer no matter where they live: the call to intercessory prayer.

Conclusion: The Bridge at Ground Level

And The Darkness Fled offers a bridge between the general Christian market with its rising concern in how to approach Muslims and the missionary biography section and its God-glorifying testimonies of lives lived under the Lordship of Christ. Too often the life of a missionary seems personally unattainable and the thought of interacting with Muslims overwhelming. Darkness Fled de-myths both.

Delgado’s present tense approach as a novice missionary keeps the reader engaged at ground level. Together they develop friendships with Muslims and share the love of Christ. Together they prayerfully intercede for those literally and spiritually imprisoned while learning to trust God with their own families and lives. And together they stand against fear and take steps into the darkness, following Jesus—for the Light came into the world, and the darkness fled.